Do you have collaborative ideas or work related propositions? Or do you just want to give some feedback? Go ahead!

Continues from the previous story

I woke up in the morning. It was bright. Shit. What time was it?? Seven already. We needed to hurry. We packed our stuff quickly and left the bungalow prison behind. Just as we were sneaking forward on the beach with our luggage, passing the building, we ran into yawning Hazard. Oooops. Uhh. That was awkward. “Morning Mr. Hazard. Did you think about the refund that we asked for? As you can see we are leaving now.” I said. Hazard was dazzled as always and not noble enough to give us any money back. But Antti was brave enough to negotiate: “What if we just run now and you keep the money as a compensation for that (shitty) food that we got here, served by a graphic designer – who like us wasn’t the sharpest knife in the kitchen!” Hazard didn’t pull his knife on us but instead let us go. Freedom!!!

We sat on our luggage on the dirt road and started waiting to hitchhike. 20 minutes passed by before we saw a a pick up truck coming with three Mexicans. I was there of course and Antti to give the surprise disappointment hiding behind me. They stopped and they seem really nice and not dangerous. Until the driver told us that his pals that didn’t really speak any English were ex-military. We looked each other wondering when the car will derail a bit further in the jungle… But no all they did was stare every women’s ass that happened to pass by. It was actually a pretty cool trip with the locals. Crazy 4×4 driving on a super bumpy road listening good music and having the everyday Mexican feeling. The driver was really nice and polite restaurant owner. He dropped us before went to buy some fresh things in Tulum town. We went to use the internet in our previous Tulum hotel and the familiar boy there was taking care of us. We had decided to go to the pure waters of Laguna Bacalar – that had actually been our other option before ending up to Hazard’s place. We had heard only great things about Bacalar so we took the bus and left.

WOOOWWW. Back to nature! Can you imagine a 70 km long lake which is all pure, having seven shades of different blues, all good minerals and not having any sort of pollution or trash around. I found my new favourite besides the thousand lakes of Finland. This was weird but I felt like being in a summer cottage in Finland – but this was the Mexican version of it. A bit more stable weather, great all year round. Expect summer being too hot. This, winter, was great timing. We swam a lot, we did kayaking, sunbathing, walking around, ATE GOOD – no mandatory diet anymore! And did two super great very personal tours. But before telling about them, we also did find a best accommodation ever! 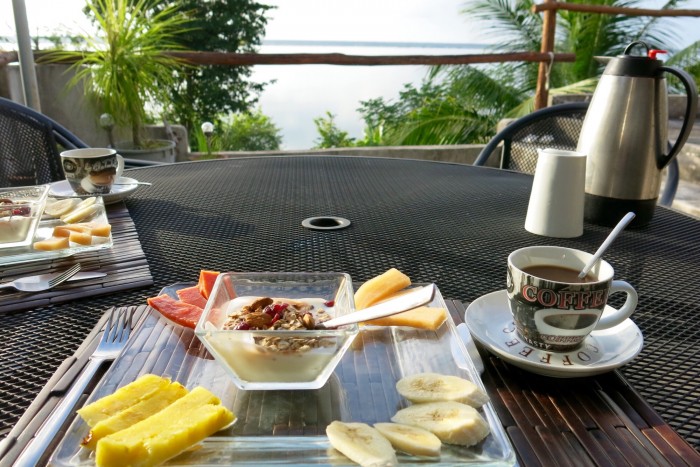 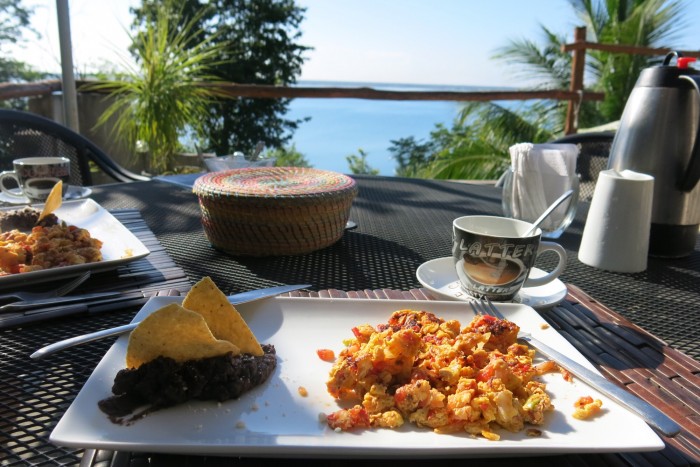 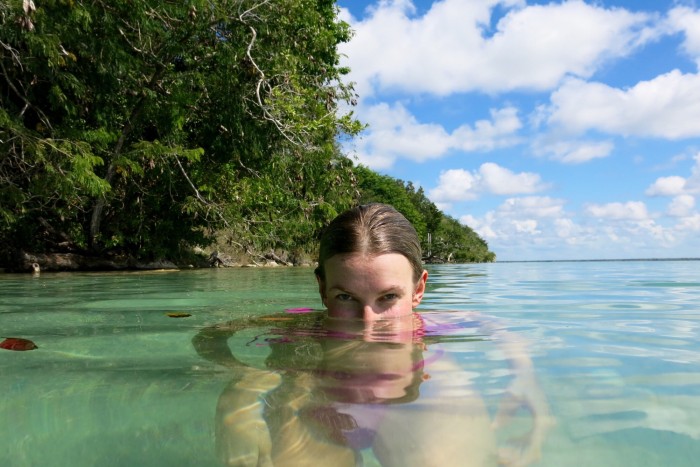 From Tulum already we had made a phone call after quick search with great reviews. A lady had sound warm and friendly already on the phone. Yolanda was there for us at the bus station. Very helpful from the start. After doing the most important, buying some cold Sol, she brought us to her home. To her and her husband’s Bed and Breakfast a bit further away from the town Bacalar. It was a perfect place by Laguna Bacalar and on Earth too. Such a beautiful home, what funny and inspiring “open air” loft apartment with cheerful Mexican colourfulness – and with Yolanda’s art. She was an artist, wuuu! That too! And then what else! You should see my face after three chihuahuas – the parents and a BABY PUPPY came greeting us! It was love at a first sight. Their Spanish names were hard so I started to call them Papi, Poju and Mami. I have always thought that Chihuahuas are too small, but not anymore, I wanted to adopt Papi… Felt miserable leaving her behind.

Some highlights at Laguna Bacalar was seeing a humming bird! I was desperately trying to get my previous blog post through and chasing the signals outside – while the humming bird flew next to me for a while and said fuck it, look around and live in the moment. In Australia platypus became my symbol and now I got one more spirit animal! And I have been a dolphin once. What was also exotic was to hear all the crickets when going to sleep and seeing the starry sky from the small windows on the roof. And once again there was window in the shower on the roof to admire the full moon when showering. You could also hear the cock singing in the morning as well as all the parrots and other exotic birds. And got the sunrise light in the veranda. Where to lay on a hammock and enjoy the lake views. Laguna Bacalar – an amazing lake, that changed from a perfect stillness to rougher waves. That had unique eco system and life. Maybe the most beautiful lake on earth. Even though I would like to hide the secret and I hope tourism will never ruin this peaceful place I highly recommend all the nature lovers to experience it.

We took a very personal boat tour of Jimmy’s who knew everything about the lake and who took us to places that we couldn’t understand to be there. How can world be this beautiful, I was fascinated! Jimmy took us to the cenotes, there where spots where the depth was in hundred metres! He was telling that all the water of the lake comes from down – of the network of caves filled with fresh water. There is this unique nature fresh water filled cave system in Mexico and lake Bacalar is only approx. 10 000 years old and was born and baptised with these waters. The water of Bacalar is very pure and full of minerals. There weren’t noise, only noise of animals. We saw some amazing birds and Jimmy was telling there are many bird species living there as well as small fishes, but also much bigger fellows like pig horse looking tapire and even crocodiles! Uuuuuu. I did’t know about the crocodiles earlier but continued swimming after Jimmy told that in these waters crocs are very shy because the water is clear and visible – from their birth they have needed to hide the birds not to eat them so they keep in the mangrove bushes and hidden in general. I felt like a crocodile myself when we were floating through the beautiful rapids, narrow creek in the middle of the mangroves. It was so much fun. There was no one else there. It was a crazy moment. Just us and the beautiful nature of the this world! I felt I wanted to take all my loved ones there, even my lated grandma!!! I want to have a summer cottage by this lake… 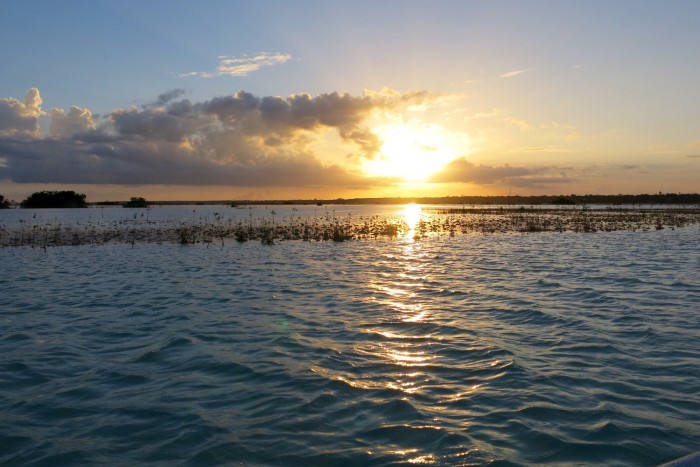 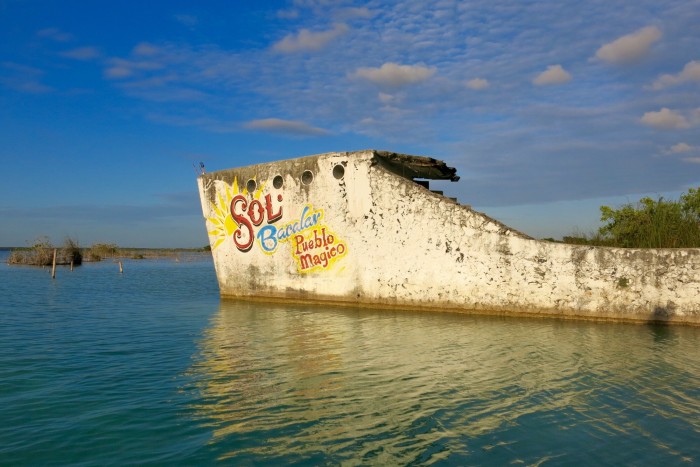 The other memorable trip that we made was when our host Pedro took us to the Mayan ruins of Dzibanche and Kohunlich. These are big majestic ruins in a beautiful jungle setting. And that are not known by the tourists. In general there are few tourists in the Bacalar area. Good. Once again we where there at the ruins by ourselves and were very thankful for that special time. Well there was some noisy company, the big black monkeys on the trees – and actually there was a big territorial fight going on between the two families. So much noise, they sounded like big dogs barking. The setting with green fields and all the lushness felt like a dinosaur land – could imagined dins walking there even though the temples weren’t there yet. They came around 600 A.D. I can’t understand how the Mayans have been able to build them?? It’s not understandable. Have they got some help from ufos like there are theories and strange drawings in the Mayan heritage??? Interesting shit. 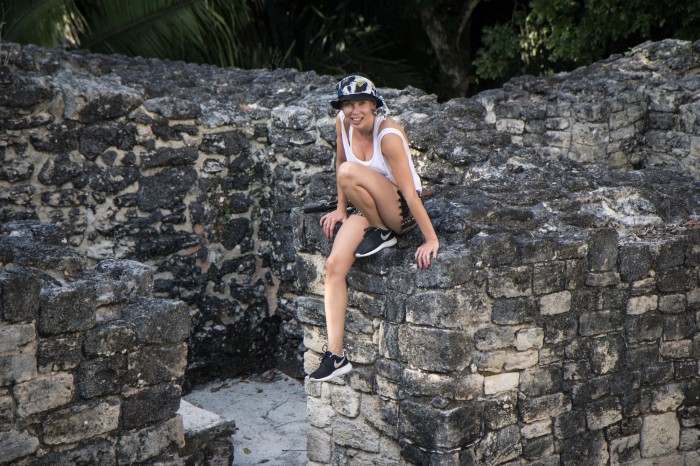 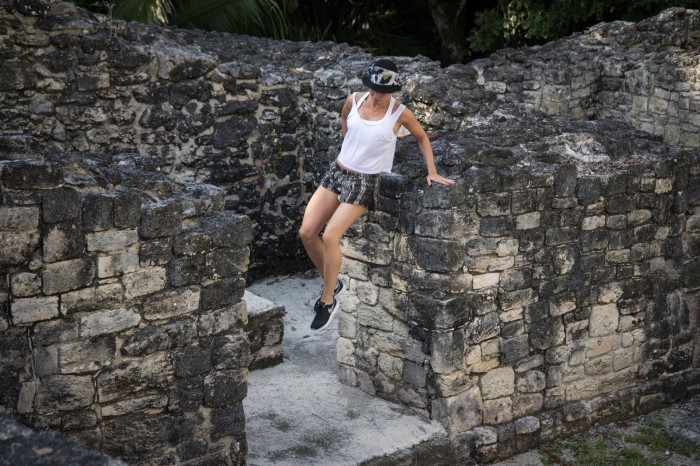 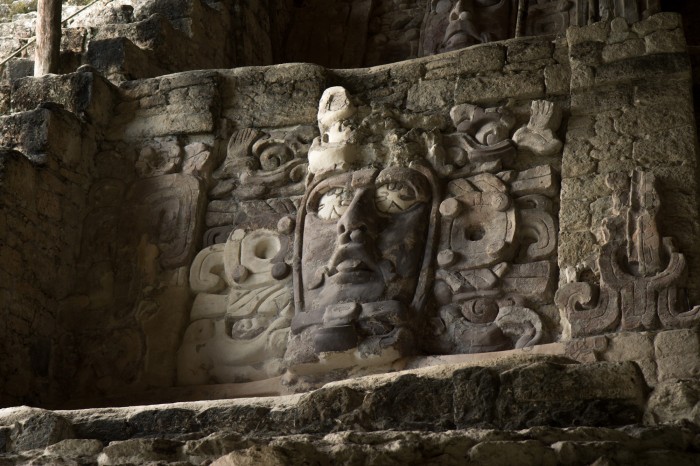 Even though it was hard to leave from beautiful lake Bacalar, I was happy to have some a couple of days in a Mexican city Valladolid before heading to Cuba. There’s no internet in Cuba. So catch you up a bit later! 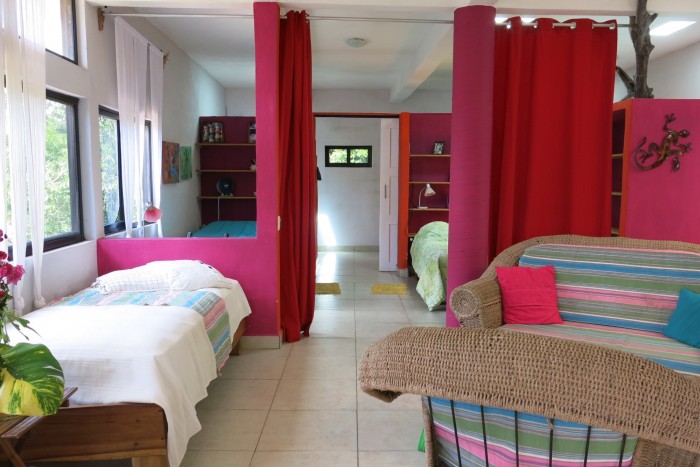 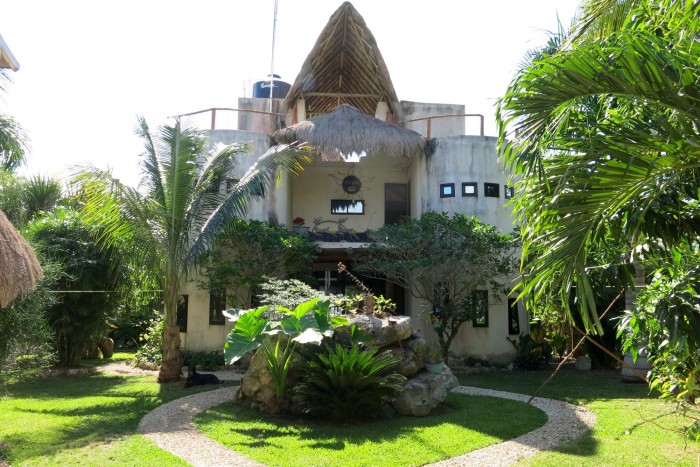 Facebook Comments
Share on Facebook
Share On Twitter
Similar Stories
Travel with heart = sustainably! Skip the hit destinations
In the most ideal case travelling would look and feel like this: so natural that it would be in balance.
Christmas Holiday in Germany
I went to Stuttgart for the Christmas market and to Tübingen for the Chocolate market!
Fascinating Lisbon – The San Francisco of Europe
Portugal has the romantic vibes of the mystical remote countries...
Bad Religion – The Politics And The Freedom of Speech
A year ago I was walking on the street once I got a message and stopped! It was from my friend who told me a well-known Maltese journalist Daphne Caruana Galizia was murdered by a car bomb.
Tampere – a Lovely City!
This summer I have spent my time in Tampere – like I did last summer too. Just because I really enjoy my time in this town.

1
When in Korea… The Oddities of South Korea
2
Sliema – the Promised Land of Pubs
3
”Don’t Get It" Things of the World – Cambodian Massacre
4
Earth in My Mind! The Moments When I Have Realized What a Perfect Planet We Live in
5
Fascinating Lisbon – The San Francisco of Europe

Hey My Foreign Friend, Go And See Punkaharju And Savonlinna!
Earth in My Mind! The Moments When I Have Realized What a Perfect Planet We Live in
The Big Realization: You Are Responsible For Your Life.
Mediterranean Walk in Malta: Victoria Lines – WOW
Who Made My Clothes? It's Time for The Fashion Revolution